The Wigan Council Cultural Service delivers a number of activities and opportunities for people in the borough across three key venues that includes: The Museum of Wigan Life, The Wigan and Leigh Archives and The Turnpike Gallery. Take a look at What’s on in our new quarterly culture guide. 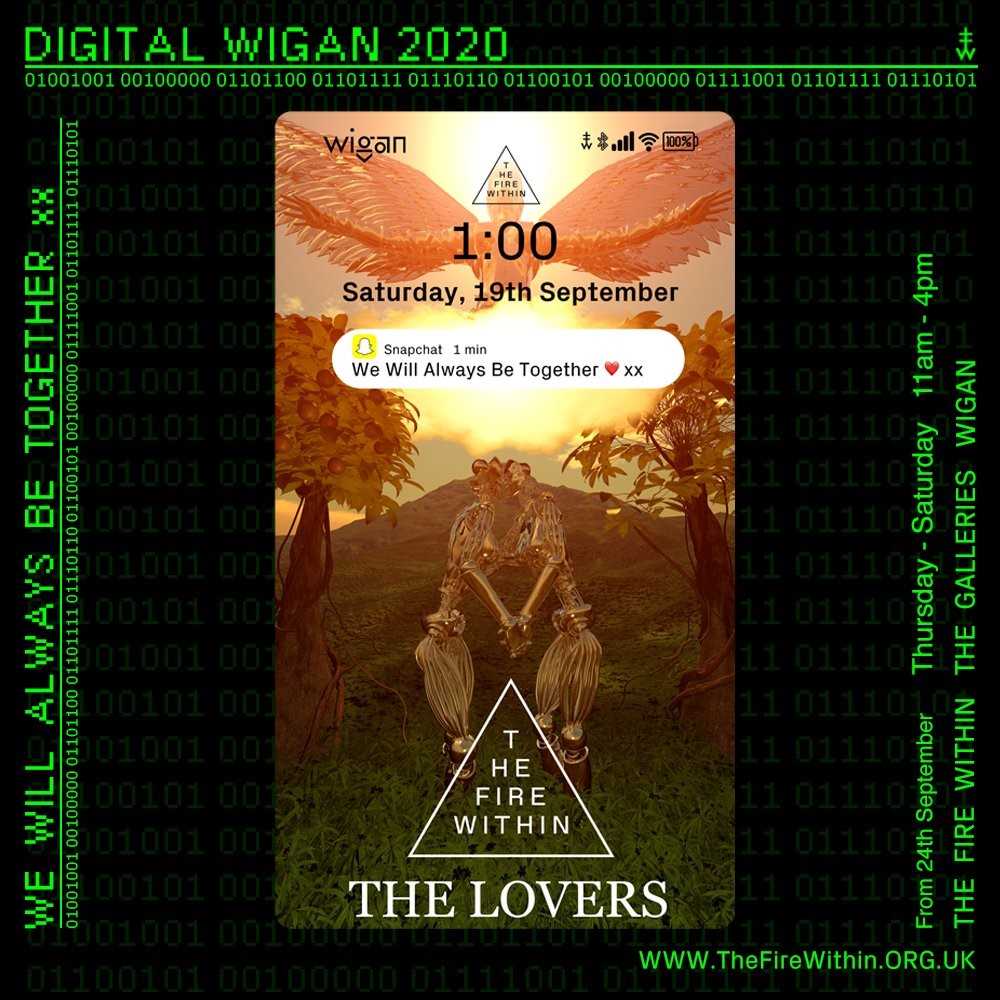 We Will Always Be Together XX

'Digital Wigan' will be explored through an exciting new show called 'We Will Always Be Together xx', a world where tech is more important than ever.

Visual artist Elle Bulger creates dreamlike art pieces applying digital techniques primarily used in aspects of videogame development to create truly captivating, interactive, and immersive works. The nature of this medium allows Elle to shape their art into something truly unique, Transforming how digital art can be experienced and shifting the way that videogames are viewed by the arts community. This interview will explore the inspirations behind their decision to pursue a career in videogame artistry, delving into the creative processes behind Elle’s thought-provoking narrative project Methuselah which she completed last year for FACT Liverpool. The relationship between fine art and videogames will be discussed in-depth, examining how the cultural community views this shift into the virtual realm of digital interactive pieces and if they will ever truly be accepted as conventional art.

Throughout lockdown, young people have been dealt a raw deal and government and the media has become preoccupied with the idea that they will become a ‘lost generation’. We Are Flame challenges this perception and celebrates the talent, passion, creativity and resilience of young people in Wigan who are waiting to step up to the challenge of post pandemic life, not just catch up on what they have missed.

Ahead of 'Stop Food Waste Day' on the 28th April, Archives Wigan & Leigh have teamed up with Food Action Together (Age UK Wigan Borough) to host a talk all about local recipes from the Wigan Borough. We'll be talking about their research into the heritage of local recipes, sharing some for you to try and talking about the best recipes to reduce food waste. Everyone who attends will be given a small pack of digital recipes from our local Archives for you to try at home! 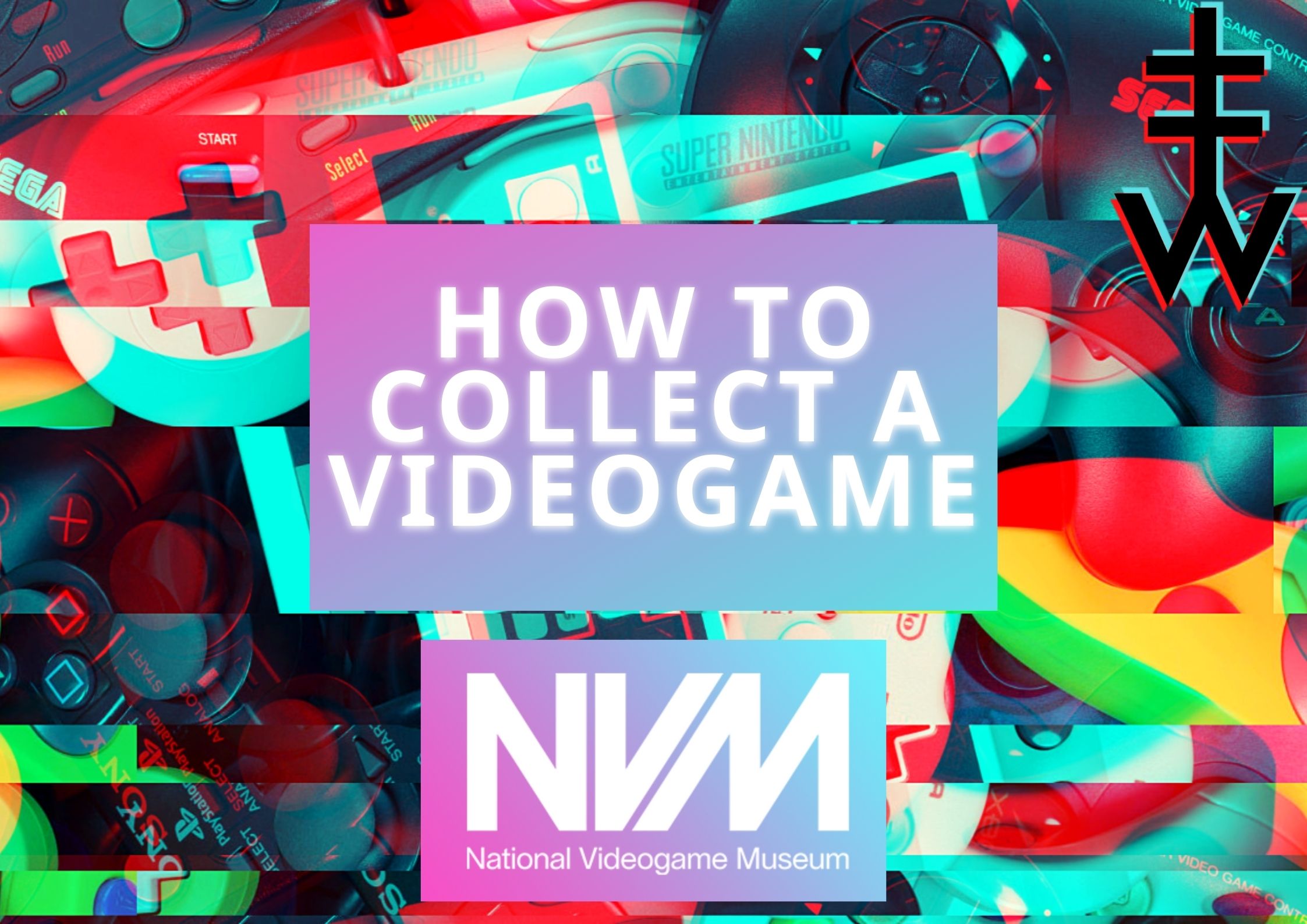 How to Collect a Videogame by The National Videogame Museum

Join the curators of the UK’s National Videogame Museum as they take you on a journey through their book ‘A History of Videogames in 14 Consoles, 5 Computers, 2 Arcade Cabinets...and an Ocarina of Time’. As the title might suggest, this is a history of videogames...in things. Things? Why things? Surely videogames are digital? For sure, videogames are about graphics and sound, they are about zeros and ones, data and code, bits and bytes and pixels and sprites, but they’re so much more than that, too. They are joysticks and mice, computers and consoles, collectible plush toys and Barbie dolls, soundchips and, importantly, ocarinas (of time). Videogames are things we play with. They are playthings. But let’s not forget that they are things.

On the 15th April 1912, the Titanic sank just four days into her maiden voyage from Southampton to New York City. Of the 2240 passengers and crew on board, more than 1500 sadly lost their lives in the disaster. Join historian Caroline Heaven on the anniversary of the tragedy as she tells the story of the ‘Bolton Boys’, two local captains who played very different roles on that fateful night. 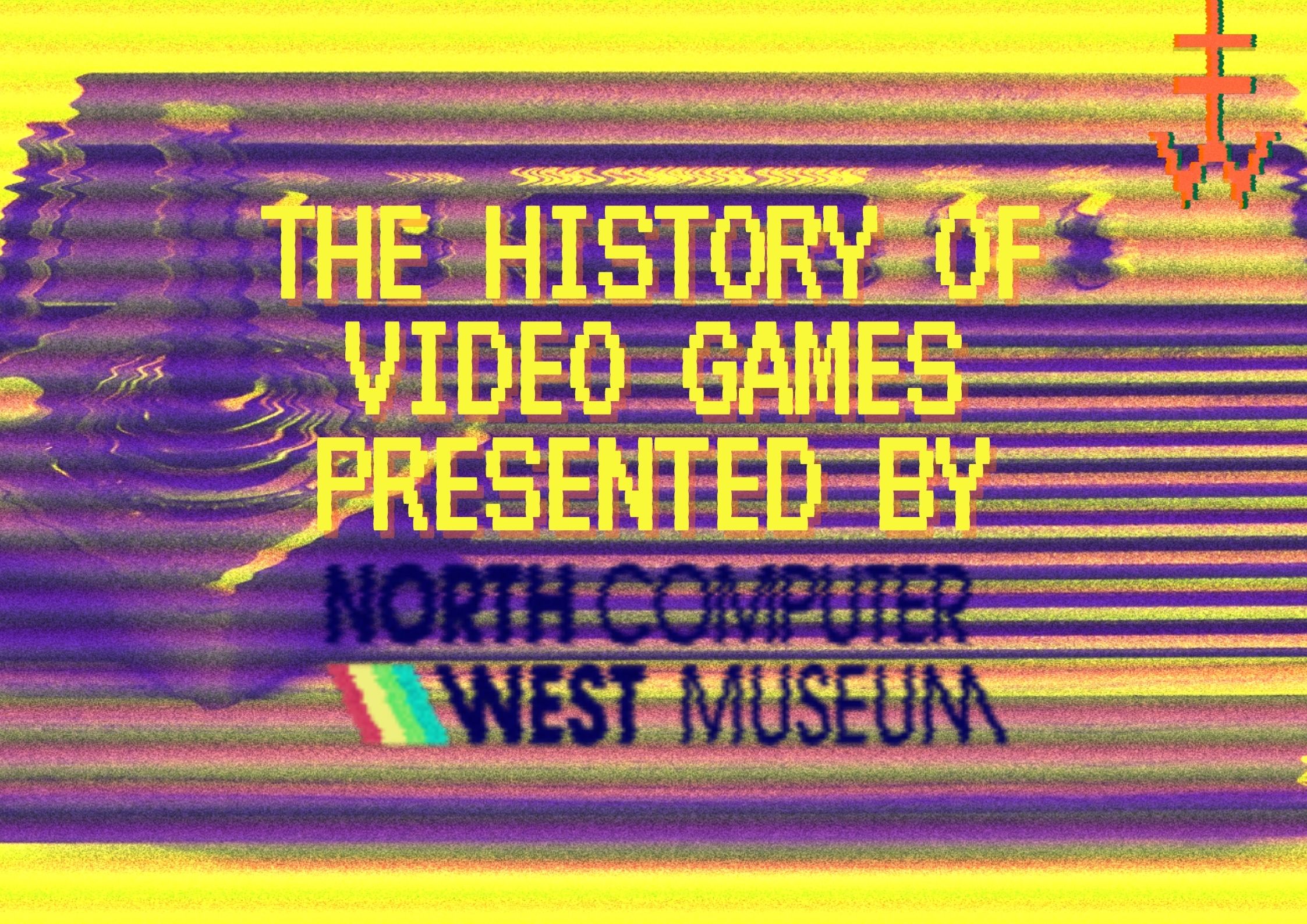 The History of Videogames: Presented by The North West Computer Museum

Our current exhibition at The Fire Within “WE WILL ALWAYS BE TOETHER XX” is an exploration of the computer age and the digital worlds we inhabit. Video games are one of the most important artforms to emerge from this new era, they are the perfect combination of art and technology. This has inspired us to introduce a series of online lectures all about gaming and how this artform has evolved into the multi-billion-dollar industry it is today. Our first talk in this series will be presented by the North West Computer Museum’s Joseph Kay who will be discussing their amazing collection of vintage consoles and arcade cabinets, guiding you through a detailed journey of video game history, discovering hidden gems and interesting stories. 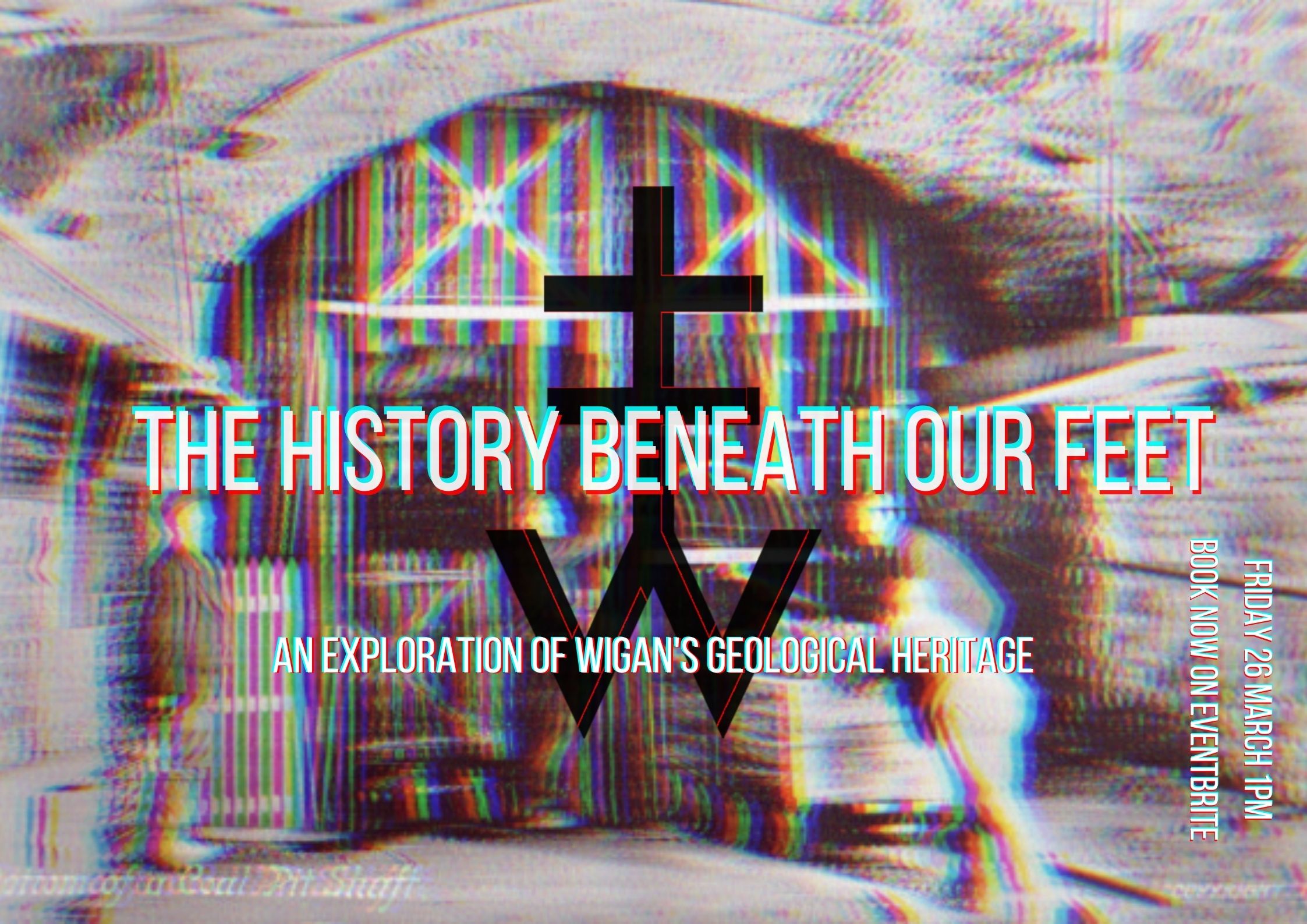 The History Beneath our Feet: Wigan’s Geological Heritage by Simon Davies

Join us for an in-depth discussion of the geological heritage of our borough, piecing together the factors that contributed to the creation of the mineral rich ground upon which we walk. Through extensive research, local geologist Simon Davies will explain how our combustible landscape was formed thousands of years before Wigan’s inception while referencing the hardships and harsh conditions of Victorian era coal mining compared to modern practices.

Following years of bitter struggle, some women gained the right to vote in 1918. They eventually gained the same voting rights as men in 1928. It was 1970 before they achieved equal pay. In the long fight for recognition, some local trailblazers favoured direct action, while others fought in different ways. Join us on International Women’s Day for a talk by Yvonne Eckersley as she shares evidence of female activism in Wigan that challenges the perceived understanding that in the struggle to create a better world, women, especially working-class women, remained passive and left political and industrial activism to men or middle-class women. 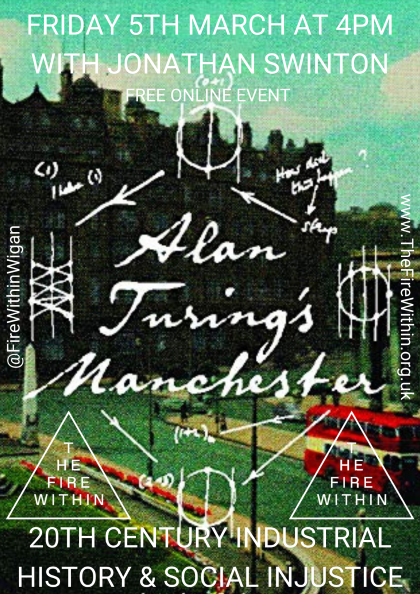 Al and Al's Prix de Jury award-winning film The Creator, in our latest exhibition, explores Alan Turing’s life in the setting of a psychotherapy session. This introduction provides the foundation for #TheFireWithin’s first digital talk on Alan Turing! Manchester is proud of Alan Turing but does it deserve to be? Jonathan Swinton will use his recent biography of Alan Turing’s Manchester to explore the paradoxical way Manchester takes pride in its role and simultaneously condemns what happened.

💥 View our past what's on events.