Curated by Things That Go On Things

The canals in and around Wigan are special places and an integral part of our history. Over two nights, artists will bring light to this incredible place, raising awareness of the waterways and creating new experiences and wonder during the winter evenings.

Watch From Wigan to Leigh video 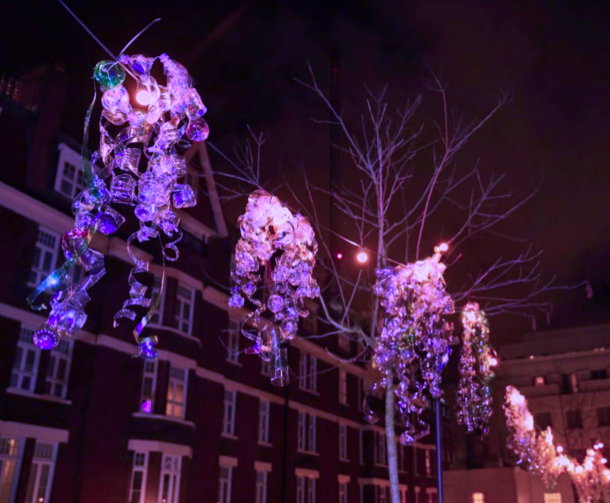 Bottle Festoon was originally presented by Lumiere Durham in 2009 and is inspired by an original concept Message in a Bottle Chandelier by Thadian Pillai. The unique and eco-friendly octopus-like chandeliers are made from plastic bottles - each one created by local school children, community groups and families, using plastic bottles from home that would usually be thrown away. In the UK 38.5 m plastic bottles are used and discarded every day and only half are recycled. This means that more than 16m bottles are put into landfill, burnt or discarded into our oceans and environment each and every day. Bottle Festoon creates art from our plastic waste and draws attention to the current plastic crisis. The artists and creators were young people from Wigan STEAM, Wigan Youth Zone, Sunshine House Community Centre, Newbridge Learning Community Centre, Marsh Green Primary School, 20th Scouts Wigan and Ashton St Peters School, and produced by Kirsty Gbasai. 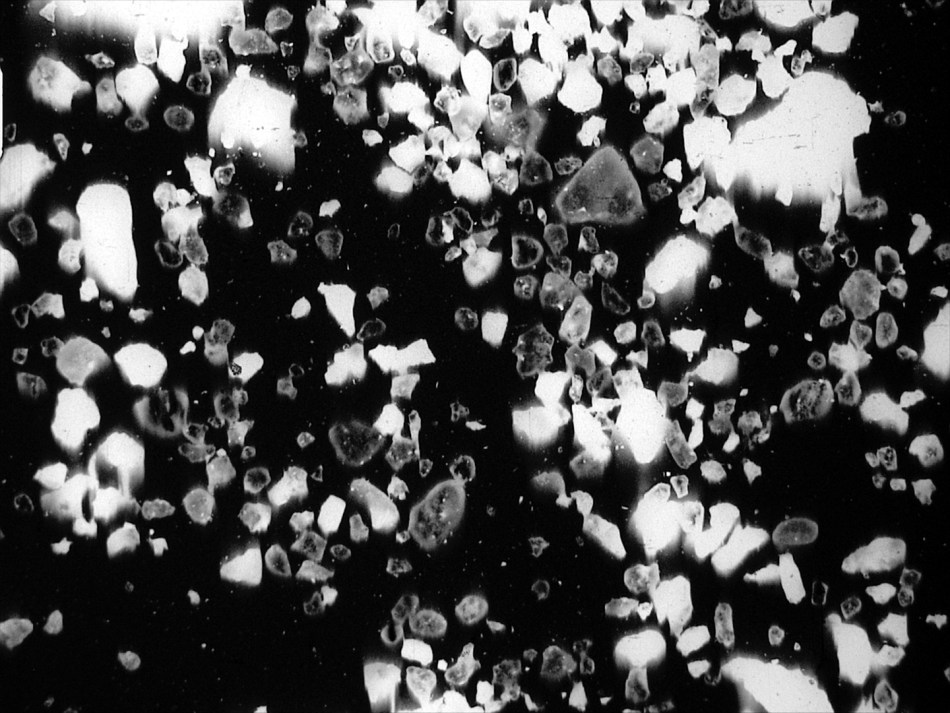 Kathy Hinde’s family hails from Wigan and she is delighted to be bringing her incredible ‘River Traces’ to her ancestral home. River Traces was created in collaboration with the River Frome in Bristol by exposing samples of river sediment and algae directly onto 16mm film, and developed using eco-processing techniques such as coffee and plant developers. Physical traces are generated through a direct encounter between the material qualities of the river and the film itself, affecting both the visual and audio track. The results are combined with underwater recordings into a poetic audiovisual trace of the River Frome. Kathy has reworked this version for the Wigan landscape. Visit www.kathyhinde.co.uk. 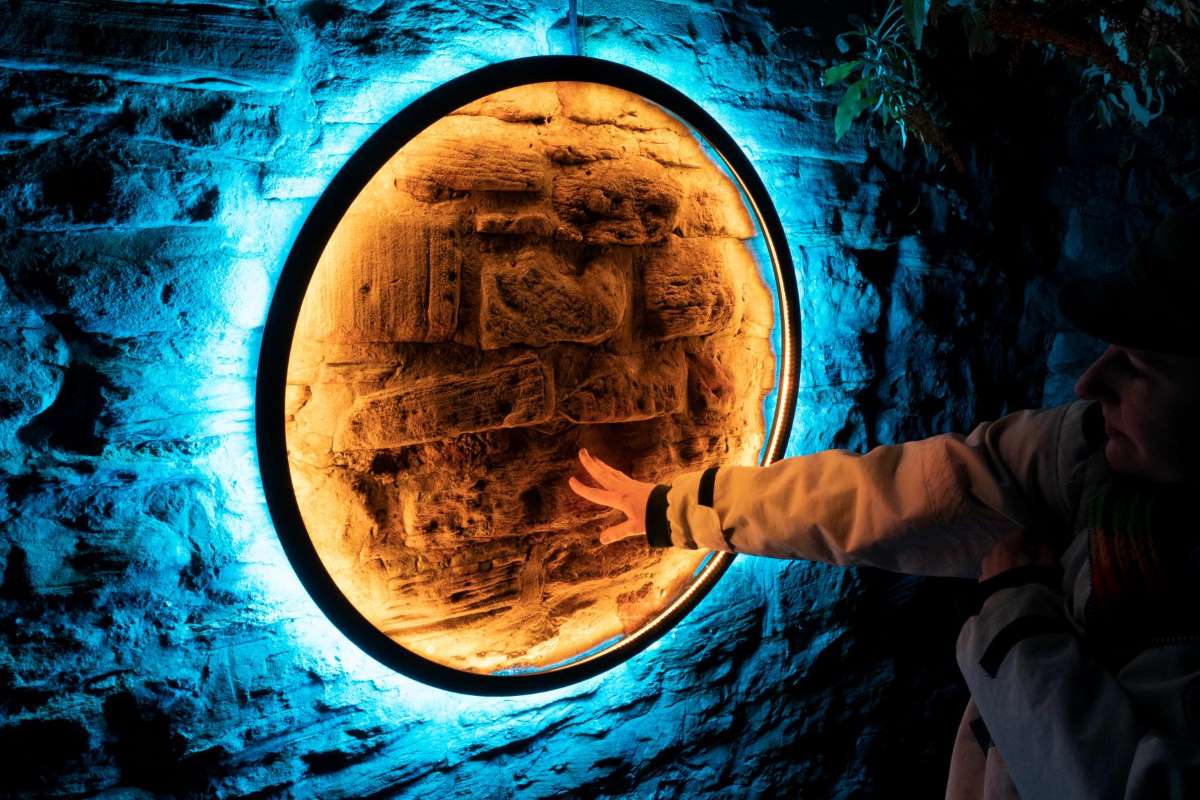 Colour Burst aka Chris Plant has spent the last 30 years working with light, projection, sound and code/electronics. He likes to reuse, repurpose, and modify obsolete technology wherever possible, to create immersive work, on large or more intimate scales. He is interested in altering our perceptions, making the easily overlooked and ignored world around us intriguing, wondrous and magical. Harmonic Portal examines the effects of time and weathering on the surfaces that surround us, as well as how we perceive both colour, and sound, and their harmony or dissonance. Visit www.colour-burst.com.

4. From Wigan to Leigh and Back Again - Things That Go On Things

This piece is an ode to the canal network between the towns of Wigan and Leigh and the beautiful slower pace of life on the water. The historical mottos of each town will be nostalgically presented and beautifully illuminated and will travel between Wigan and Leigh on the sides of three canal boats, arriving in each town at dusk. The increase of technological and digital influences on our lives has determined an increasingly fast pace. Social media, instant messaging and  personal mobile phones have resulted in an untenable level and speed of communication.  The canal networks reference a slower and more peaceful way.  The natural world becomes more apparent by the water and the routes, both towpath and water way, are seemingly ‘off grid’. The climate change emergency is also referenced both in the recycled plastic flowers, created by local community groups under the guidance of artist Diane Watson, as well as the memorial wreath aesthetic - are we facing the death of the ‘Natural World’? Can we slow down its demise? Can we slow down at all? We need to work together, now more than ever, to ensure the future of the planet is protected.

The work is conceived by Things That Go On Things and is a collaboration between local artists: Jonny Ball - artist and traditional signwriter, Aaron Pearce - artist and canal resident, Diane Watson - artist and creator of plastic flowers, Carla Mellor - poet, M3 Industries - fabricators, Northern Heart Films, With thanks to Art Tea at The Turnpike, Leigh. A wrap around programme of workshops and talks will accompany the work as well as a film tracking the boat’s journeys.

The piece is in Leigh on Fri 19th Nov, moored by ALDI car park, WN7 4LJ and travels to Wigan on Sat 20th Nov to be part of Light Night Wigan. Visit www.thingsthatgoonthings.org.

Listen to Grow Together and Keep Going. Poem by Carla Mellor 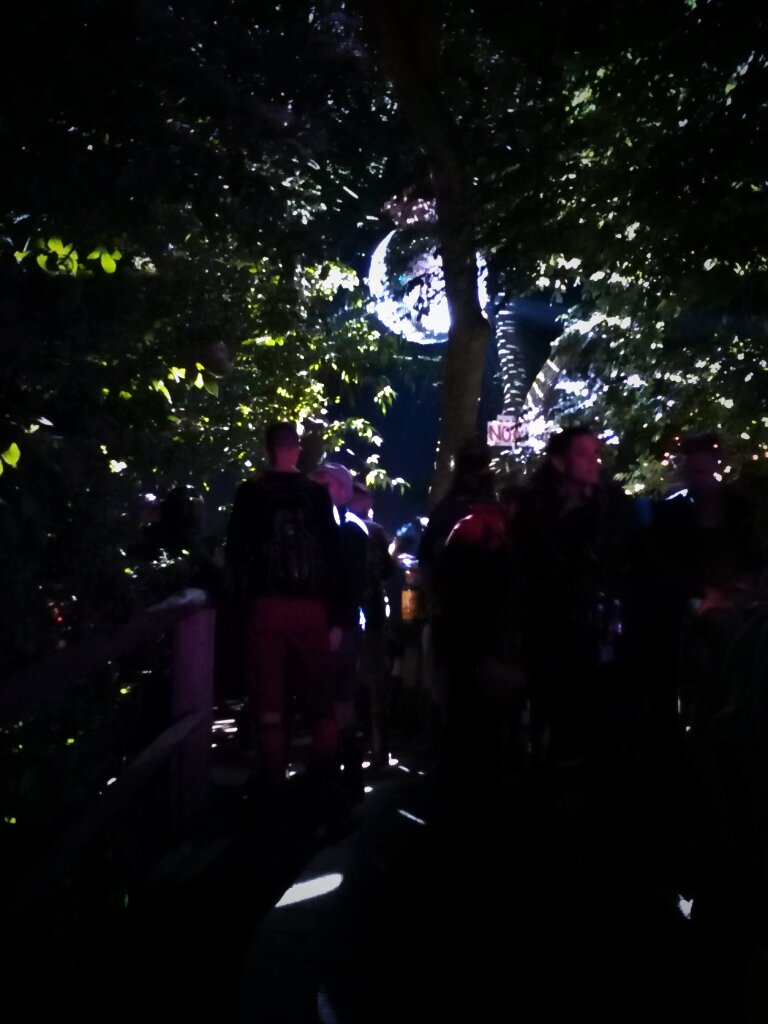 The dazzling light of a mirror ball juxtaposed with the natural beauty of a willow tree. Visit www.jackwimperislight.com. 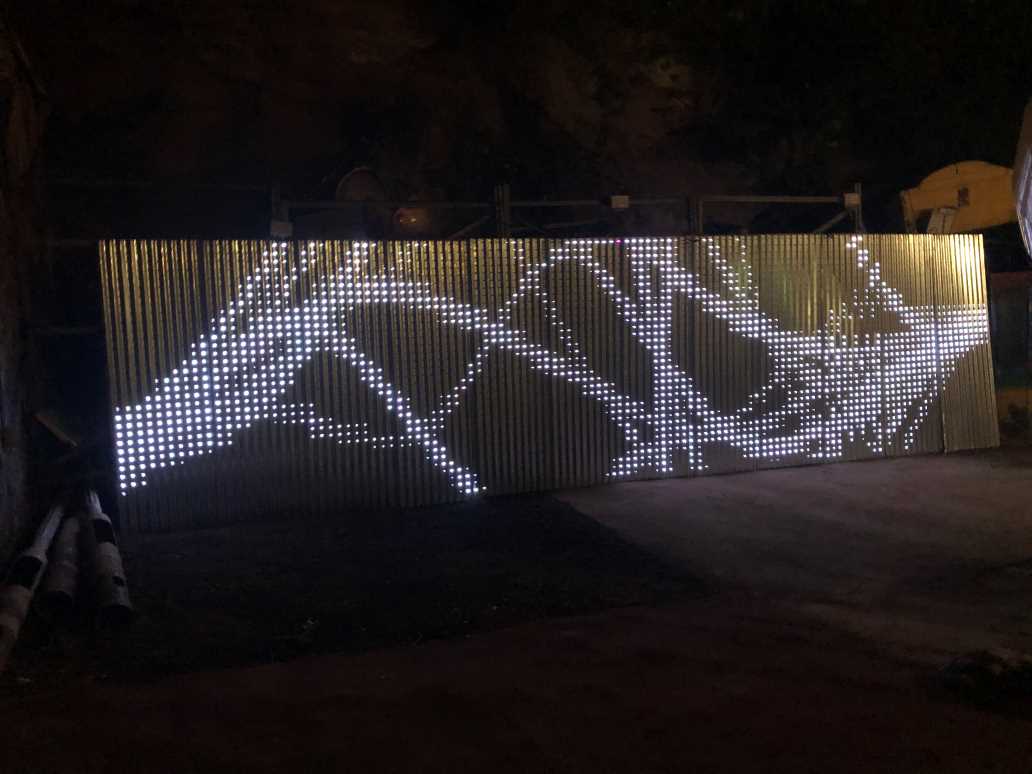 Jack Wimperis makes things out of light and things into light - environments, sculptures, experiences - as long as they bring joy. His work has been shown at Bristol Light Festival, Winter Lights at Canary Wharf, and many times at Glastonbury Festival. Jack has recently been commissioned for the Sky Arts show 'Landmark' currently showing at Gloucester Guild Hall. Jack’s work is uplifting, intriguing and multisensory. He often makes things from materials we throw away - such as milk cartons and tin cans - not only for the aesthetic appeal but as a reminder to find beauty in the everyday. With this piece, Jack utilises traditional industrial materials to create an unexpected pixellated fence. Visit www.jackwimperislight.com. 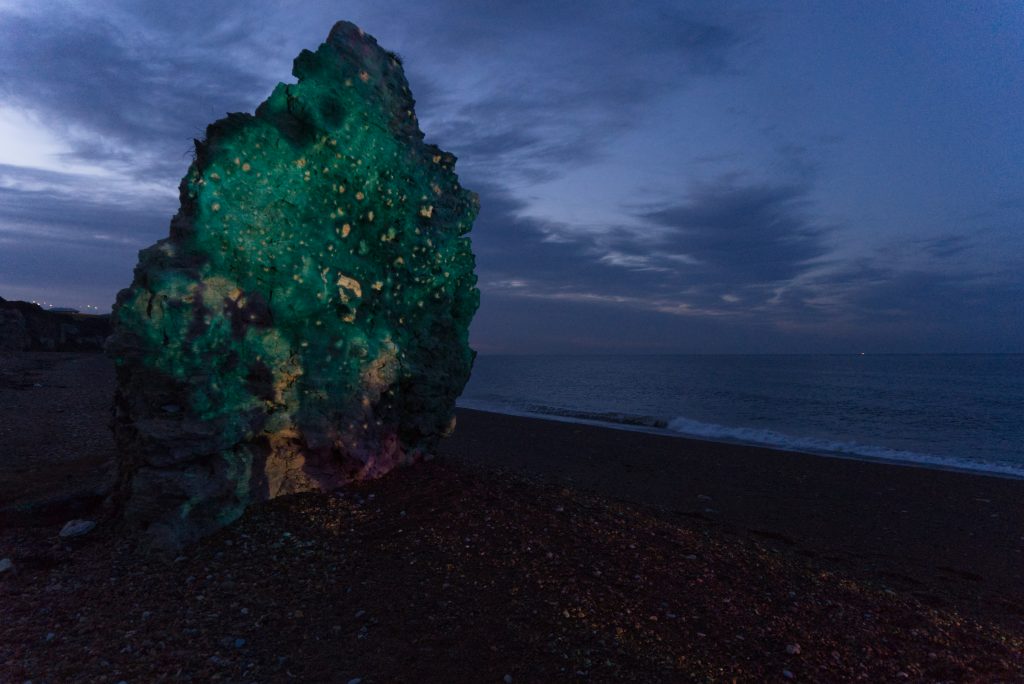 Chris Plant has spent the last 30 years working with light, projection, sound and code/electronics. He likes to reuse, repurpose, and modify obsolete technology wherever possible, to create immersive work, on large or more intimate scales. He is interested in altering our perceptions, making the easily overlooked and ignored world around us intriguing, wondrous and magical. Recent Slide Projections have included natural and hand made images projected into human altered landscapes and computer generated ones projected into natural environments. They are an exploration of the anthropocene, how humans change nature and our world, and how nature reclaims it. Visit www.colour-burst.com. 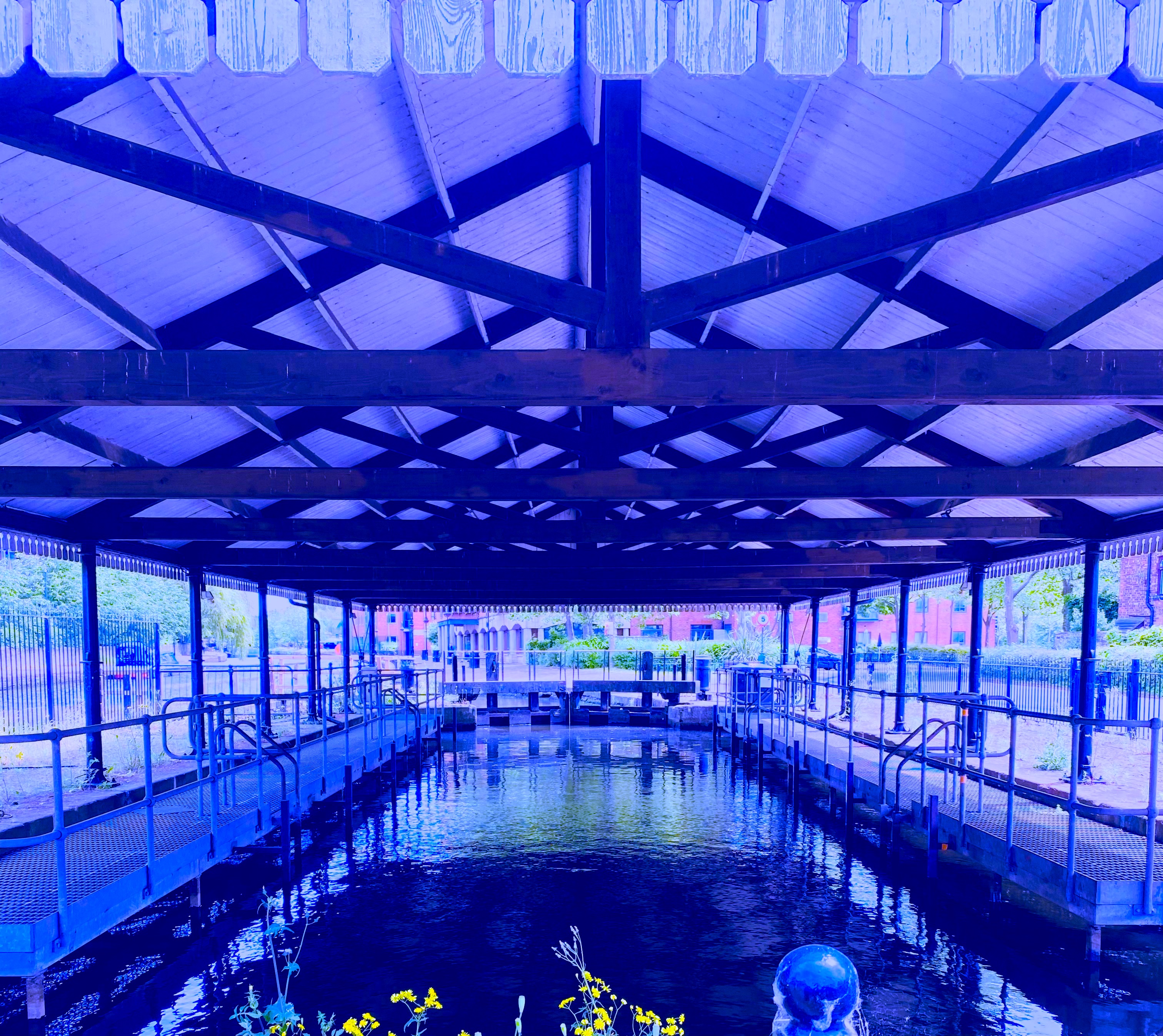 Highlighting the beauty of the dry dock, which could be overlooked due to its familiarity on the landscape, Jonny’s simple and effective lighting design enhances the architectural detail of this stunning example of industrial heritage and asks the audience to pause and reflect on the location still in use today. Visit www.productionstuff.co.uk 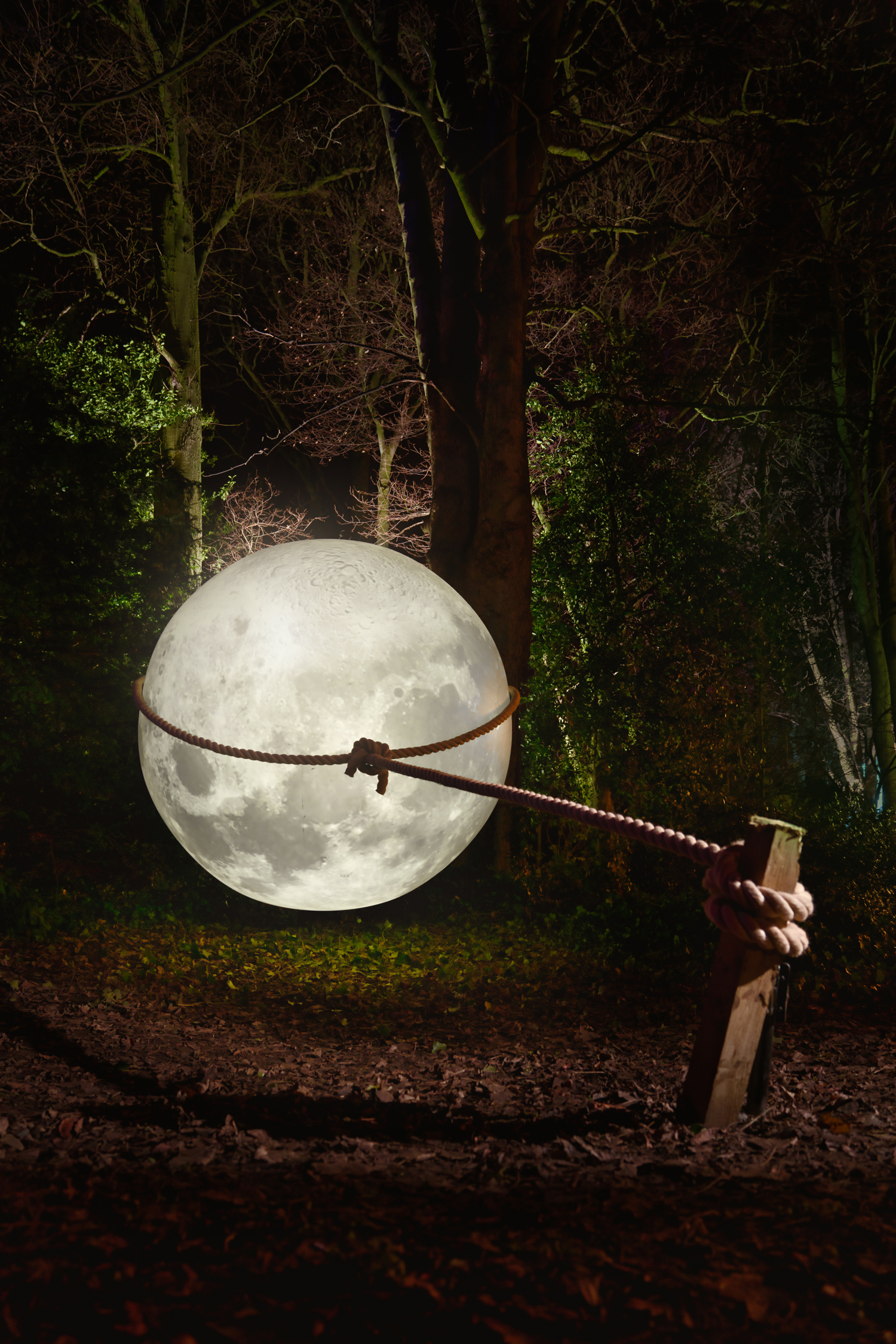 The Moon has long been thought of as an enchanted and mysterious object, and while no woman has yet stepped foot on the lunar surface, women have long been associated with it. Over 50 years since the first Moon landing, NASA has announced that by 2024 its Artemis program will see the next footprint made by a woman. The Moon hovers in the air and rotates gently, while its crisp white projection casts a cool glowing light onto the ground. Ursula Lassos the Moon is a realistic representation of the Moon, apparently removed from its orbit and magically lassoed to the ground by an invisible female protagonist named Ursula. The high definition 3D projection sphere reproduces surface details and textures that are normally only visible through access to a high powered telescope. Visit www.studiovertigo.co.uk. 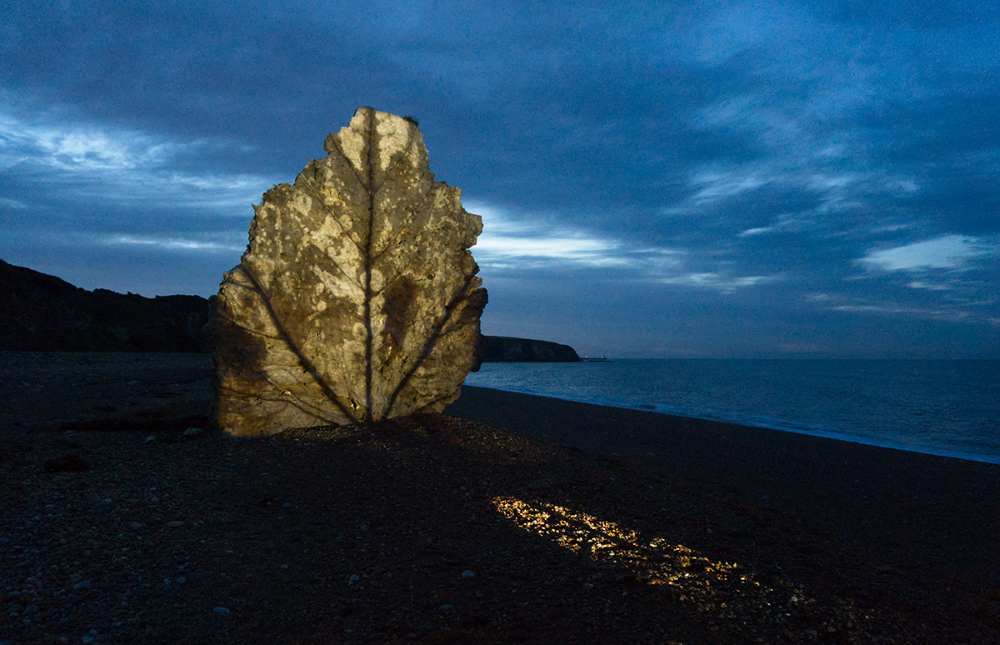 Colour Burst is the interactive software and visual content umbrella of Chris Plant, aka Catweasel. Visuals have been his overriding passion since 1991 when he first started doing live projections with 16mm cine and 35mm slide projectors. Getting hooked on computers for video playback and manipulation after vjing on several tours with an Amiga 1200 in 1995, he has been pushing them to their limits ever since. The Slide Projector Interventions use 1940s Aldi medium format projectors, with a high powered LED lamp inside. Visit www.colour-burst.com. 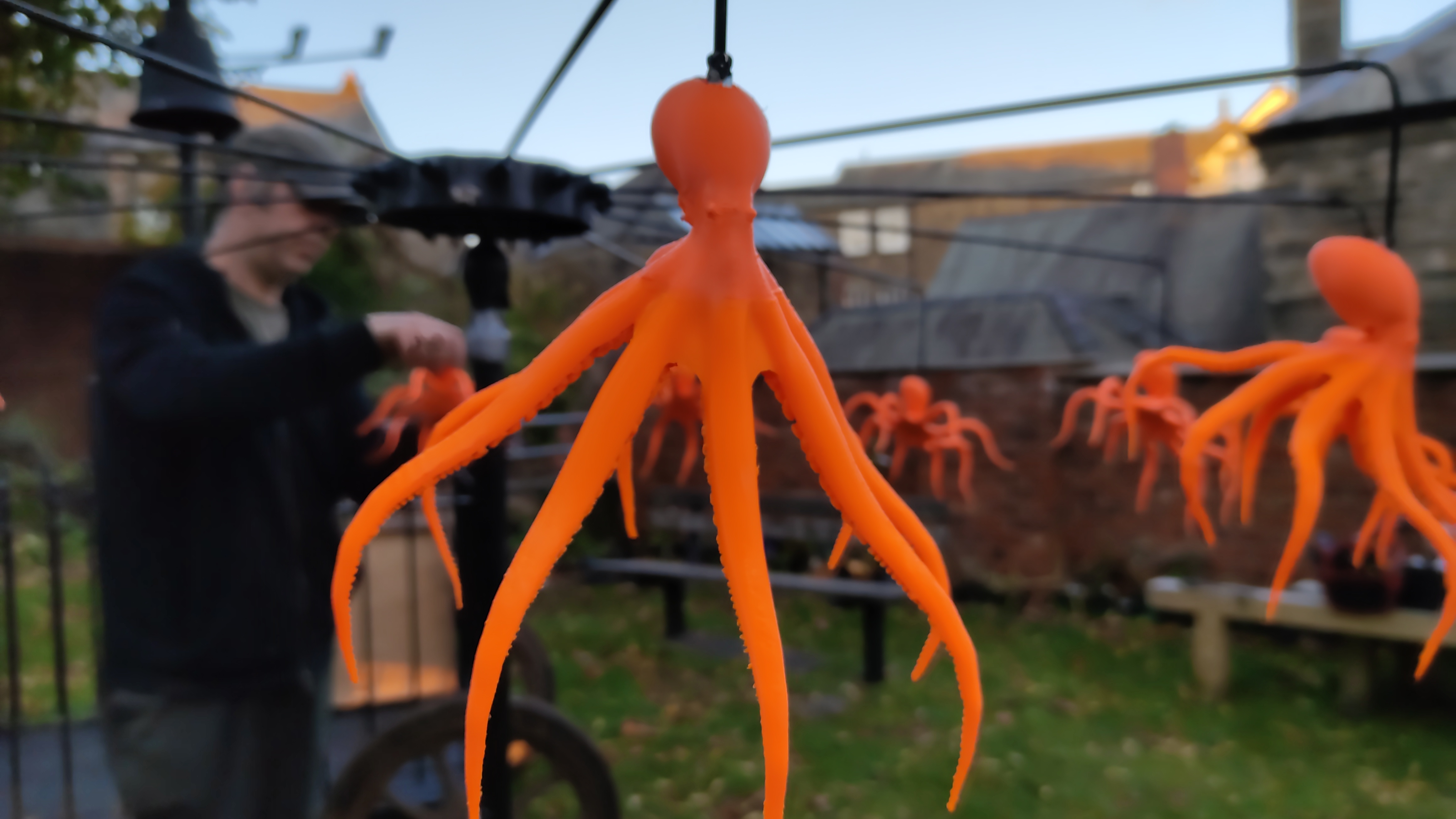 Karl Wilby has been sculpting since 1990, working across special effects, props as well as public and private exhibitions of his work. Co-commissioned by Light Up Lancaster, Karl has created 5 new Zoetropes as part of the Wigan Light Night trail. Karl hand crafts his models and then 3D prints them using recycled plastic filament and biodegradable filament whenever feasible. The models are attached to a rotating mechanism and highlighted with light to create wondrous moving creatures. His work entertains children and adults alike and has a playful, captivating quality with an emphasis on nature. Visit www.zomotion.co.uk. 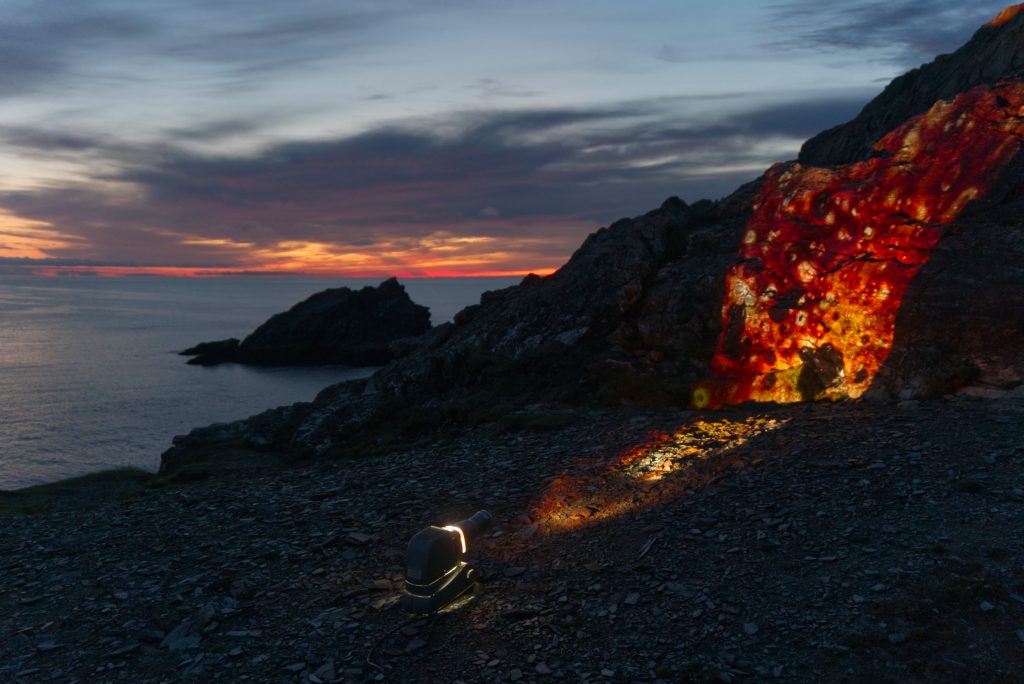 On a site visit of this fascinating area Chris Plant was drawn to this site specific location for another projection surface and adds magnification, by putting things that he finds into the gates of slide projectors; leaves, blossom, flowers, feathers, grass, seeds, lichen, plastic and projecting them several feet across, so you can see hidden details, cells, the velcro inspiring hooks on feathers, rather peering down through a microscope, you look up and around, and can move closer to see more detail. Visit www.colour-burst.com. 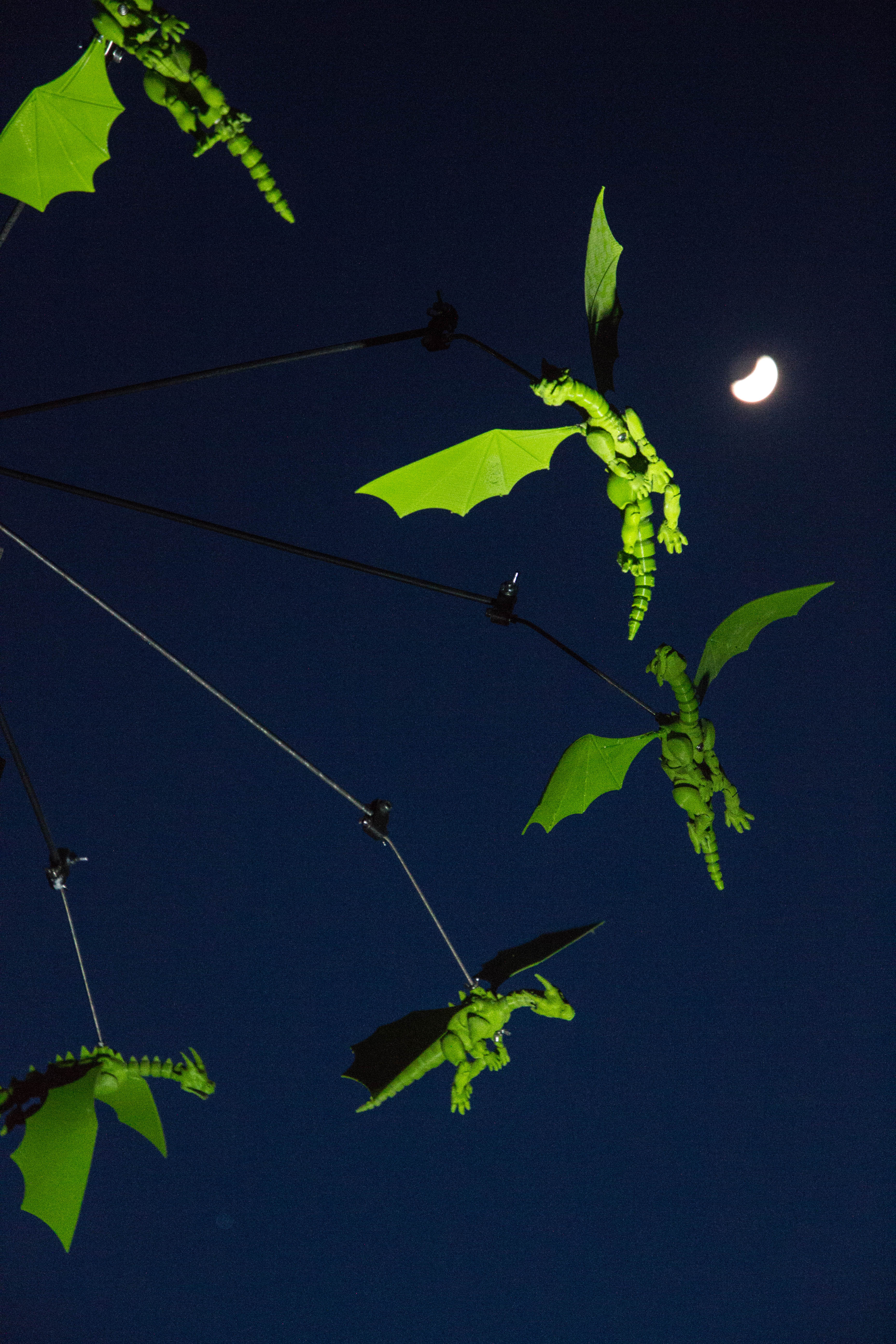 Zomotion is a way of making Karl’s sculptures move. Having the skeleton scene from Jason and the Argonauts  burnt into his imagination at a young age he has never lost the wonder and enjoyment of animation. By creating Zoetropes Karl can create 3D animations that work in real time in real life. Karl uses traditional sculpting techniques, as he loves making things by hand, to create figures and models of any subject that enters his imagination. He then 3D scans the original model and uses 3D design software to articulate the model. These models are then 3D printed to be mounted on the spinning machine. The creative freedom of this method allows him to design, make and install any themed 3D Zoetrope to suit any idea or event, and all the pieces for Light Night Wigan have a nature theme. Visit www.zomotion.co.uk. 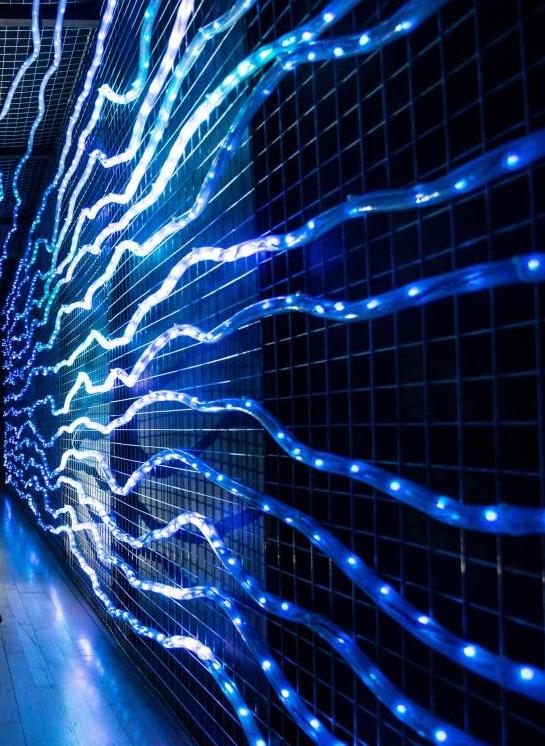 Jack enjoys creating work out of materials we throw away - in this piece he has taken ‘found’ hose and installed programmable lights within it. He designed the piece to ‘snake’ in and out of the water - playing with reflections and finding beauty within the curves of the garden hose, linked inextricably to water and the environment. Visit www.jackwimperislight.com. 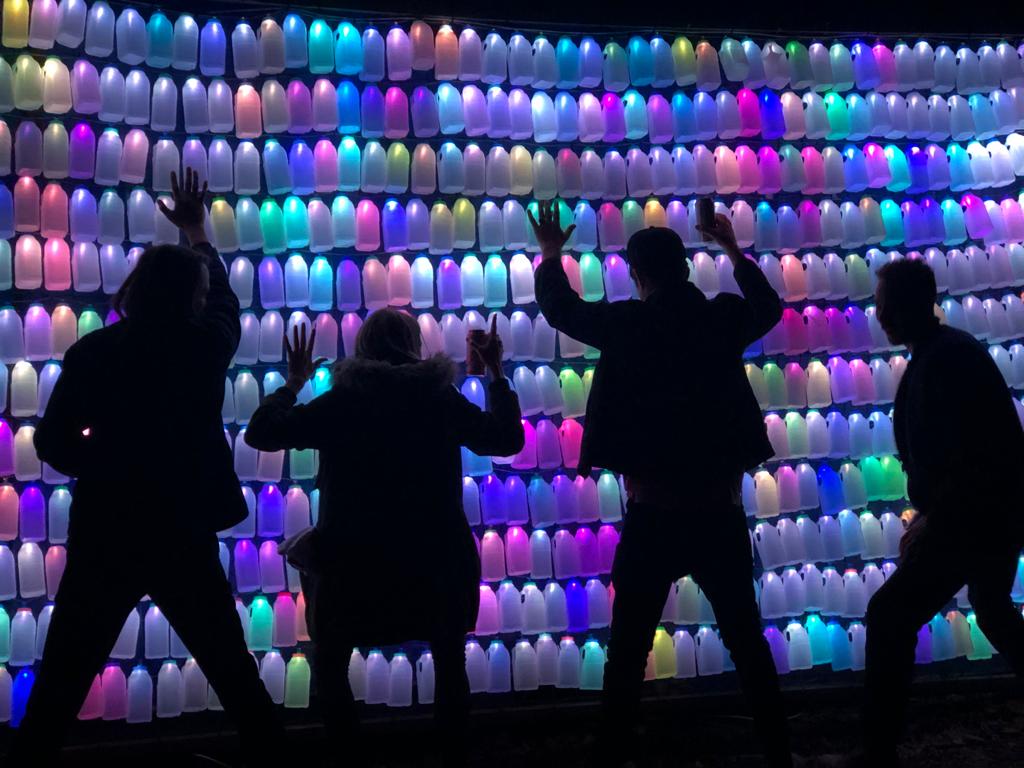 Milk Bottle Wall is one of Jack’s signature pieces - he is well known for his use of milk bottles in artwork and this stunning example is the perfect ending to this year’s Light Night Wigan, reminding us to consider what materials we consume and also to take pleasure in the everyday, ordinary items we use. Visit www.jackwimperislight.com.

For more water-related art please visit Wigan STEAM where Ula Fung is exhibiting her new collection. Exhibition opens Fri 19th Nov at 6pm to meet the artist and is open Sun 20th Nov 10-4pm. 8 Hope Street, The Galleries, WN1 1QF. During lock-down, Ula found solace in the spaces around the canals which stretch across Wigan and Leigh. The surroundings of the canal will change with the seasons and the weather but the water will always be a calming constant. During her residency at Wigan STEAM, she cycled along the canal from Leigh to Wigan, documenting her observations, senses, and experiences along the way. Once arriving at the studio Ula produced a series of paintings using natural pigments based on her journey. Visit www.ulafung.com. 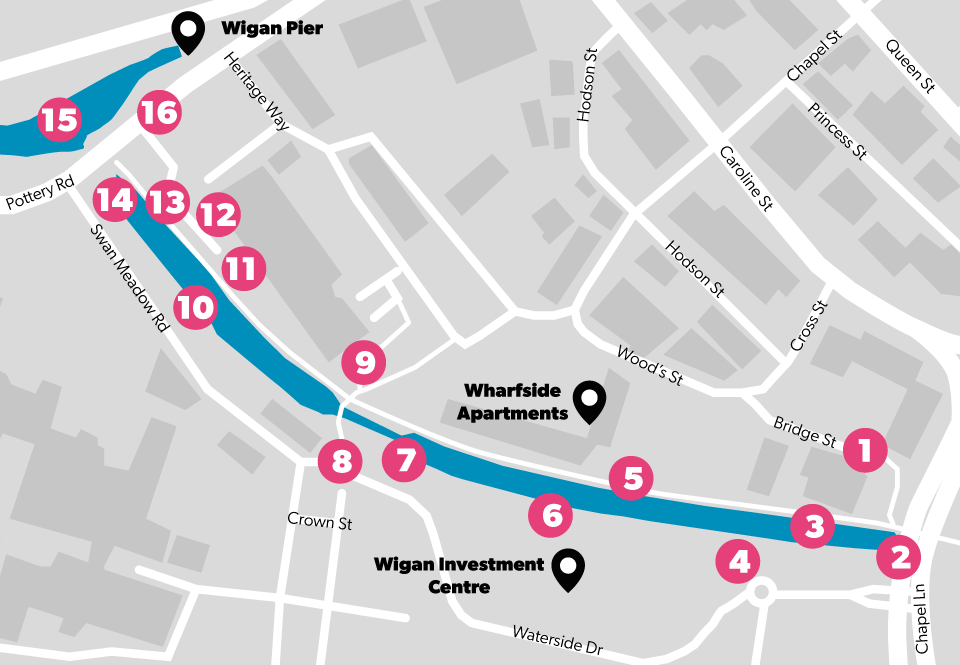 Click on the thumbnail to enlarge the walking map of Light Night Wigan. 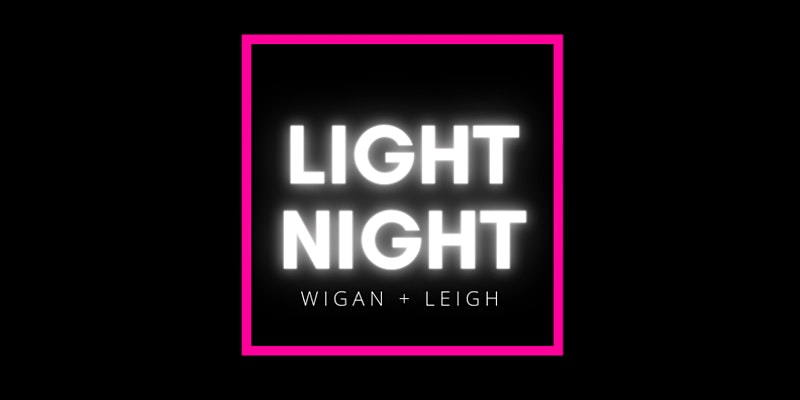